Spyros chats to Max from 100 Days of No Code about how ranking first on Product Hunt helped them to bring more people into their ecosystem. 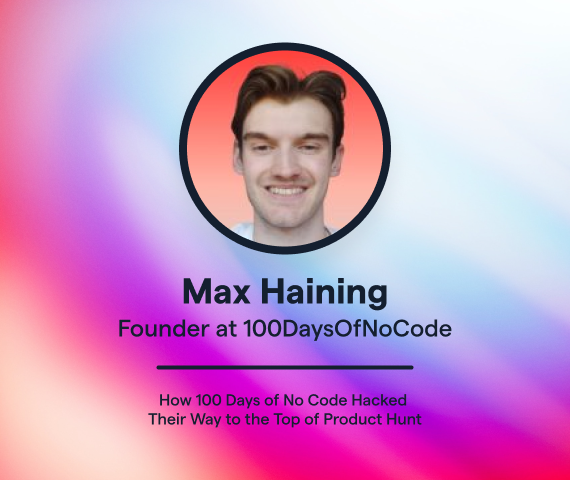 100 Days of No Code decided to launch on Product Hunt because they saw it as a growth lever while there was a good fit with their audience. When we caught up with him, founder Max Haining explained that it felt like a good opportunity to bring more people into their ecosystem while giving Product Hunt users what they wanted, which was more no code services.

Before their launch, their goal was to achieve 2,000 email signups. After they ranked first on Product Hunt and the campaign was over, they’d hit 3,000. 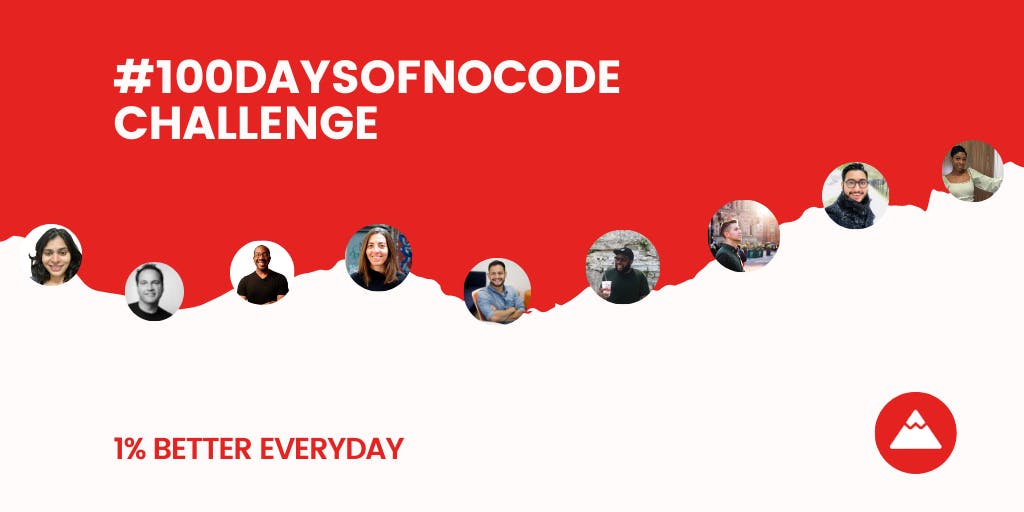 To give himself a head start, Max spent a week or so Googling how to launch on Product Hunt and reading as much as he could. Some of the tips that he picked up included:

Let’s learn a little more about how Max and his team were able to hit the number one spot.

People launch things every day on Product Hunt. The audience fit felt quite good and we’d seen other no code products do well on Product Hunt before.

When 100 Days of No Code launched on Product Hunt, they’d already been going for a year and a half or so. Max says that this was to their advantage because it meant they had a community and brand awareness in place before they launched on the site.

At that stage, they had around 250 paid members, mostly from Max promoting the service through Twitter. The problem was that it was a more manual approach and there was also the sense that he was reaching the same people thanks to the echo chamber effect.

What I lacked in knowledge and experience, I was able to gain from my friends and my network.

How 100 Days of No Code Reached Number One

According to Max, working with an established Hunter is key, and this is a commonality that we’ve seen across other successful launches that we’ve covered in our Product Hunt series. Max says that it can be either yourself or someone in your network, though he notes that it helps if it’s someone else who’s got a reasonable number of followers on the site.

During his research, Max also learned that launching at 12 AM PT – at the start of Product Hunt’s launch cycle – gives you a full 24-hour period to climb up the rankings.

Preview Hunt is a great way to preview your Product Hunt page before your launch.

Max also suggests creating attractive assets and using Preview Hunt, which allows you to preview your Product Hunt page before you launch. That gave him the confidence that his page and his assets were going to look the best that they could.

100 Days of No Code launched on Product Hunt on Tuesday 28th December, and they reached out to people a couple of weeks beforehand to let them know that the launch was coming. Max focused on telling his story, and he even expressed his nervousness, which helped to make sure that the people in his circles were willing him on and wanting him to win.

As he mentions, “I hadn’t launched on Product Hunt before and I was kind of worried beforehand. But I had a community of people on my side that were willing to support me, as well as people in my network that had launched there multiple times.”

Tuesday is one of the more competitive days to launch on, but there’s a reason why he picked the date that he did.

I was launching a new skill, new year campaign, and so the December date fit with the timeline of the campaign.

For Max, the thing he was most worried about was his automation breaking. The whole point was that if someone signed up on his site, they’d be added to his mailing list. If that didn’t work, the campaign would have been almost pointless.

On launch day, his Zapier automations broke down a couple of times because Product Hunt was sending through so many people that he had to upgrade his account so that it updated every two minutes rather than every ten minutes, which was what it was doing before. In hindsight, he says he should have upgraded his plans before launch day so that there was less strain on his resources.

Don’t forget the classic advice of making sure you reply to every comment. I also made sure that other people that I knew replied to comments, so it wasn’t just me.

Working for the Product Hunt Algorithm

By going out of his way to make sure that every comment was answered, Max was able to add some fuel to the fire because the algorithm ranks products based on both the number of upvotes and the amount of engagement they have on the page. In most cases, the most upvoted products are also the ones with the most engagement, but not always.

Product Hunt’s algorithm works in this way in case an influencer comes along and launches something and shoots straight to the top based on upvotes. Alternatively, a brand could run a huge number of advertisements to try to game the system.

That’s why they factor in additional metrics such as the number of comments and replies that a product receives. It acts as another indicator that people are genuinely excited about the product.

Max points out that if you get a good start to your campaign in the first hour, you’ll automatically be on the front page. Once you’re there, more people will see the launch, and so it starts to self-perpetuate and to create a snowball effect.

He also suggests that if you’re serious about your campaign doing well, it’s a good idea to launch something else first, just to get a feel for it and to wrap your head around the intricacies of the website and its community.

For Max, the key to success was to practice beforehand, to find an established hunter to partner with and then to gather as much momentum as possible. If you can, he recommends segmenting your audience by the time zone they’re in and then reaching out to them at different times so that you have a constant spread of upvotes throughout the day. 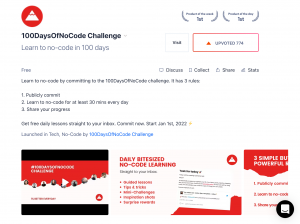 It’s key to get a good start because then your front page feature will be seen by Product Hunt’s audience and they’ll come in alongside your own audience.

As he concludes, “That’s why I tried to get a good chunk of people to vote for me early in the day. Ideally, you need to start strong and finish strong and keep as much momentum going in between as you can.”

100 Days of No Code is an online community that empowers entrepreneurs and creators who have no technical background to build their platforms and bring their ideas to life. There’s a mix of community support and educational resources to help people to upskill in no code tools to build everything from web apps and chatbots to voice applications and more.

At the time of writing, 100 Days of No Code has three full-time team members – Max himself and two community managers. They also bring in additional help on a contract basis to run their boot camps.

Find out more about 100 Days of No Code by visiting their website or their profile on Product Hunt, and be sure to keep your eyes peeled for more of our insights from the people behind the top launches on Product Hunt.

Max, thank you for your insights! 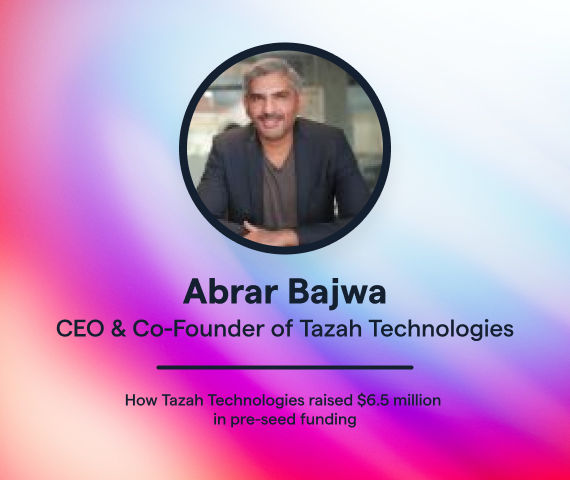 The company was only incorporated in August last year and has already closed $6.5 million in pre-seed funding. Keep reading to learn about the highs and lows so far as Abrar shares his story. 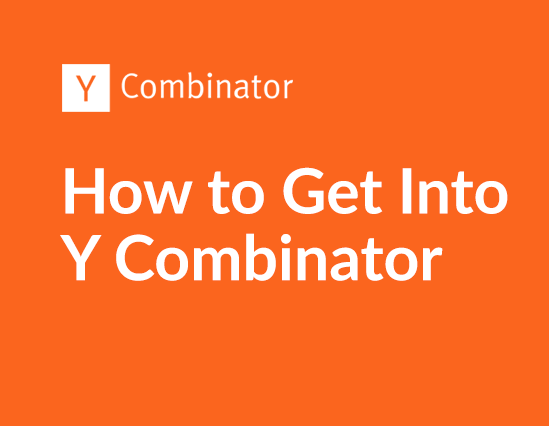 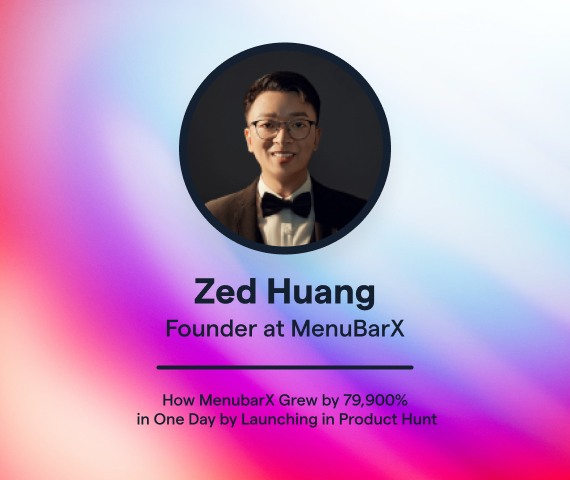 How MenubarX Grew by 79,900% in One Day by Launching in Product Hunt

We chatted to MenubarX founder Zed Huang to learn how launching on Product Hunt helped to take them from five users to 4,000 in the space of 24 hours.