Be Like Tom: Find a SaaS Coach and Not a Cult of Personality

Meet Tom as he navigates the world of SaaS coaching and ends up stumbling on a platform called GrowthMentor. 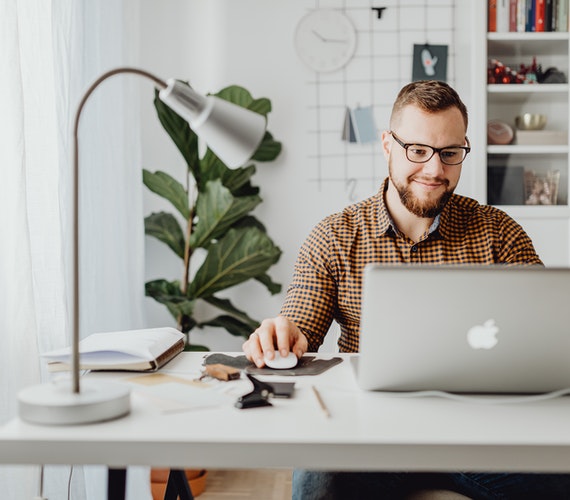 He’s bootstrapping his SaaS startup, which he started to scratch his own itch. He realizes now that running a SaaS business is hard. He thought it’d be way easier based on the success stories he read. Plus, his idea was obviously awesome and his mum always said that he was smart.

Tom has read all of Paul Graham’s articles. He even started with a lean MVP and validated that the pain point was there amongst his target audience. But it’s been three years since he launched, and he can’t seem to pass $10k MRR.

He’s in what we call SaaS founder purgatory.

That’s where you find yourself when you’re making the same amount that you’d make with a full-time job but you’re working double the hours and have ten times as much stress. Tom’s frustrated, and rightly so.

Something has to give.

And so he decides that it’s time to start looking for a SaaS coach. He opens up Chrome and runs a quick a Google search for “SaaS Coaches”. 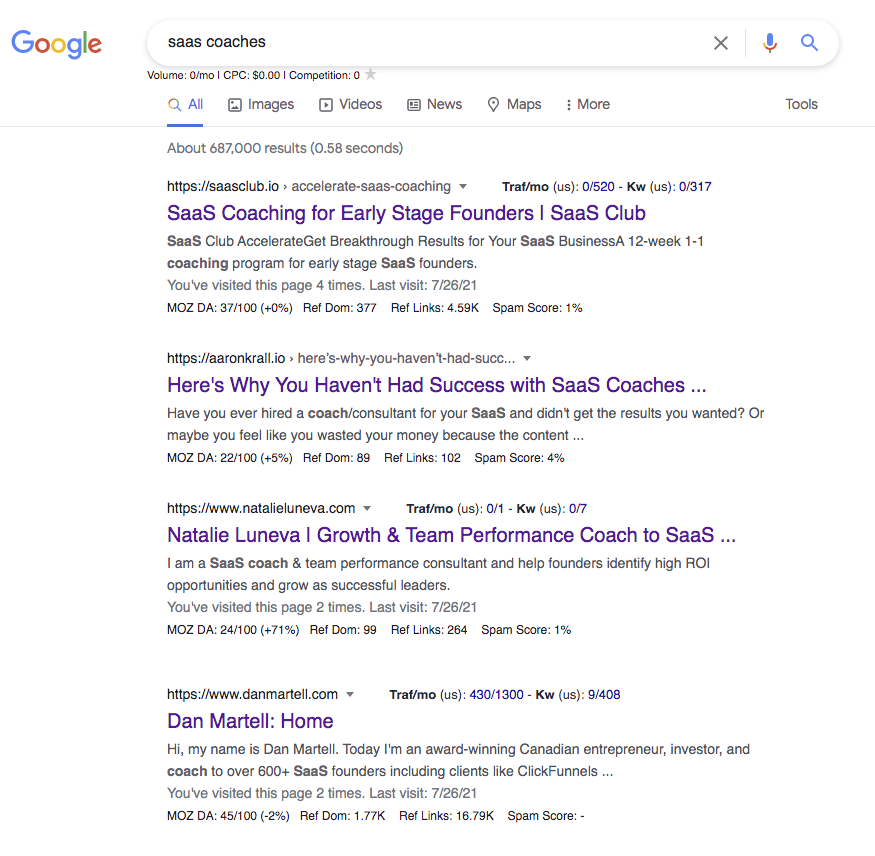 Tom’s a smart guy, which is why he’s suspicious of the many coaches that take advantage of vulnerable struggling founders by making unrealistic promises and charging thousands for their coaching services.

He knows what he wants and what he doesn’t want.

Despite all of the challenges, Tom has managed to go super lean and to set aside a monthly budget of $2,000 for growth expenses, such as PPC, freelancers, user research, coaching and whatever else it will take to move the needle. If he can find a SaaS coach that will work with him for under $500 per month, it might work out.

But there’s another challenge.

What he sees on Google’s results pages is similar to what he sees with dropshipping “gurus”. There are a bunch of cults of personality, each one using the typical tripwire model where they reel you in with the $249 introductory call and then try and strongarm you into paying for their premium $5,000/month package or their $2,500 course.

Tom’s got a lot of founder friends, and he knows that no two startups are the same. So how could a course like that work? There’s context that doesn’t overlap. When he sees these courses, he thinks, “My market, my customers and my product are all different. So how is this template going to help me?”

Tom doesn’t like it when people try to insult his intelligence, so he skips past all of those gurus.

He asks a fellow cofounder how he overcame some of his challenges.

And that’s when he was introduced to a platform called GrowthMentor.

GrowthMentor had a different promise. It vets all of its mentors based on their soft and hard skills, and all of them have to be actual practitioners. They only list the people who are actually doing the work at SaaS companies with a verified track-record of success driving growth.

But Tom was still wary.

So he did some digging and looked at the reviews people like him were leaving. 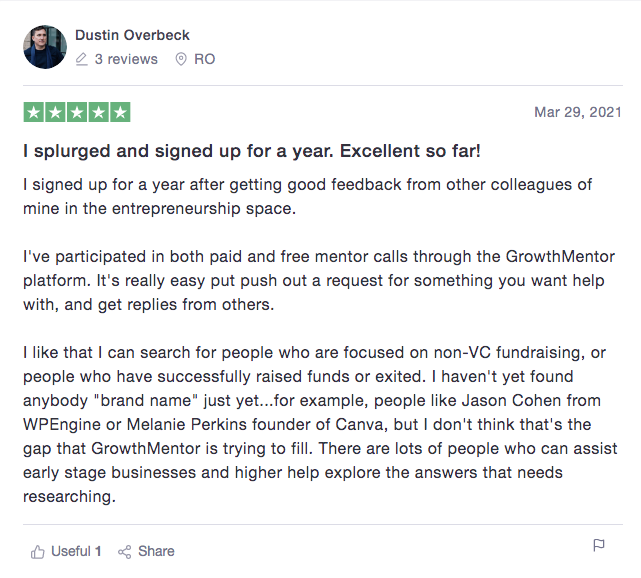 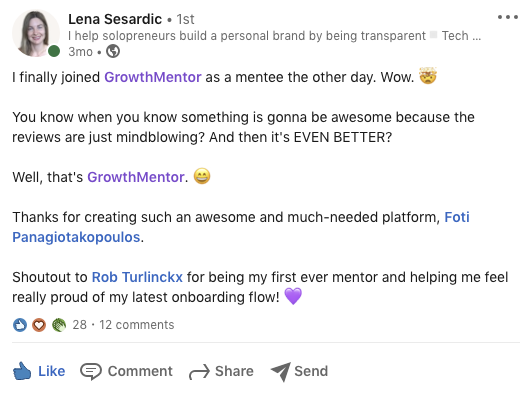 But Tom doesn’t want to be burned, so he does his research and checks out the profile pages of some of the mentors in detail.

Here are a few of the SaaS coaches that stick out to him: 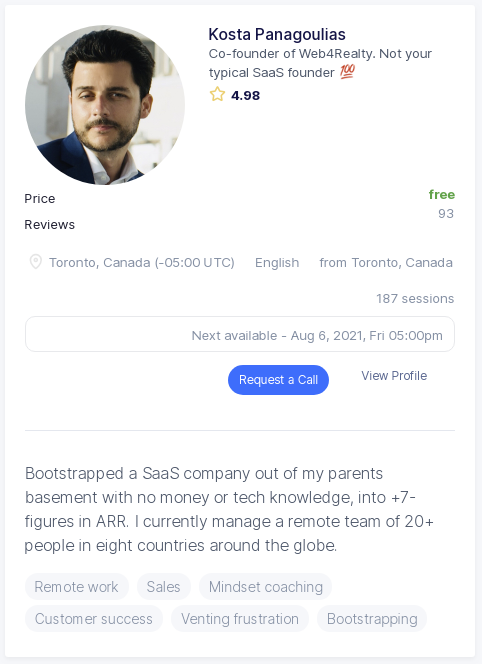 Tom likes Kosta because they’ve done the same thing that he’s trying to do by growing a company from the ground up, in this case from his parents’ basement. Kosta’s business now spans eight countries and has a seven-figure ARR, something that Tom’s been dreaming of ever since he quit his job and focused on following his passion. 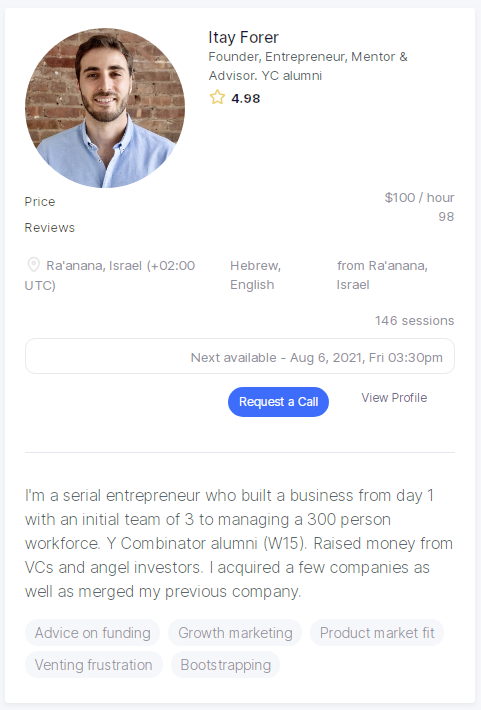 Tom checks out Itay’s Growth Reflection blog and loves how approachable he seems, especially because he makes himself available on Slack to answer questions throughout the week. Itay’s experience as a Ycombinator alumni founder is a big plus, but Tom particularly likes that he limits himself to three mentees at any given time so that he can give them their full attention. 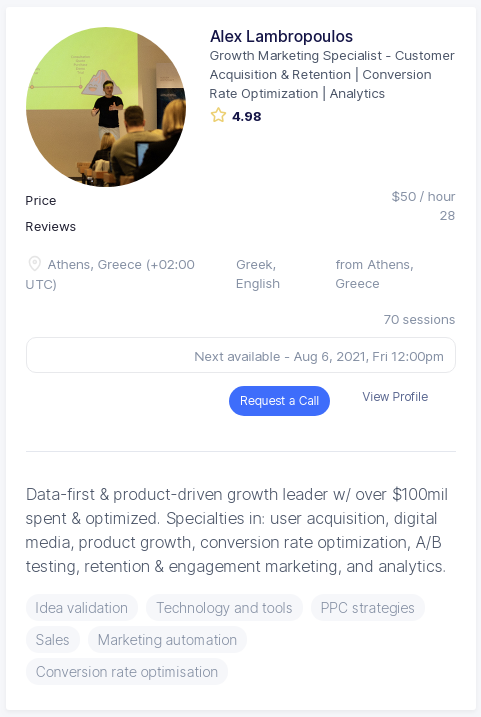 Alex stands out to Tom because he offers coaching across a range of different disciplines including user acquisition and activation, retention and engagement and the all-important digital media that he hopes will help to grow his MRR. Alex also offers unlimited email support and two hours a week of Zoom calls. 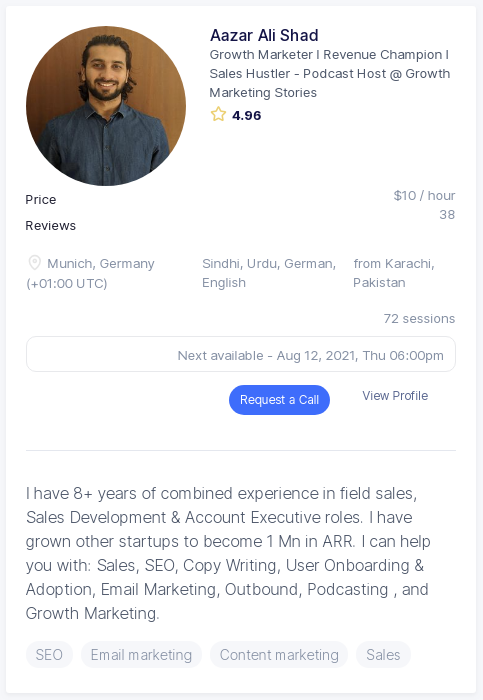 Aazar seems like a good fit to Tom because he offers more coaching time than most of the others that he’s looked at, with up to five hours per month available. Aazar also offers support across a range of different disciplines including sales, marketing, SEO and cold email campaigns. He used to be VP of Growth at Userpilot and led growth during their early growth stint from $5k MRR to +$200k MRR.

Tom is shocked at how reasonable these rates are and checks out the mentors’ reviews on GrowthMentor. He also looks at their LinkedIn profiles and confirms that they’re legit founders and growth marketers who are currently working at high-growth SaaS startups. They’re not hasbeens of yesteryear or personal brand divas. They’re just regular people with mad skills who enjoy helping people.

Tom makes the plunge and signs up. He pays $600 per year for a subscription to GrowthMentor and spends the first three months booking calls with different mentors for free. He’s kind of confused why so many mentors would be offering their time for free but it all makes sense after watching the video below.

He’d been struggling to get Facebook ads to work for him, so he focuses on talking to Facebook ad specialists instead of a generalist. The calls make him realize that Facebook isn’t the right channel for him at all and that he needs to focus on what’s already working for him. In Tom’s case, that’s content and SEO.

So he jumps on calls with SEO mentors and finds out about a concept called programmatic SEO. Through these chats, he also has an epiphany about how to create landing pages at scale using the data that his users are already creating. He’s recommended the book Product-Led SEO by one of the mentors, and it opens up his eyes to the possibilities.

He doesn’t book any mentor calls for a month as he focuses on his business, but he feels good knowing that whenever he wants to, he can access over 300 vetted growth mentors and jump on a call. He no longer feels completely alone in his SaaS growth journey.

Five months in, he’s ready for a long-term coaching arrangement and chooses Itay Forer, because he’s great at zooming out and helping founders to not get stuck with the details of the bigger picture. At just $450 per month, Itay’s virtual mentorship program is right in his budget, but by this point, he’s already grown to $12,000 of MRR due to his SEO strategy. It’s starting to work.

While Tom is a fictional character, his story is heavily inspired by the journeys and feedback of the many SaaS founders that join GrowthMentor. It’s a wild, wild world out there. There are coaches that will tell you anything you want to hear so they can take your money. Protect yourself. Be careful.

Be like Tom, and find yourself an affordable SaaS coach who has your best interests at heart, instead of going with a cult-of-personality that only cares about the size of your wallet. Give GrowthMentor a try today to find out how a hands-on coach can help you and your business.

Foti Panagiotakopoulos
Founder at GrowthMentor
You might also like
New Mentors
Talk to Mentors from these 25 SaaS companies that genuinely want to help you grow
Growth
How to Structure a Great SaaS Marketing Team
Growth
SaaS Marketing Budget, How Much to Spend? Breakdown & Examples
Founder Growth Stories
How 4 Swedes got their SaaS accepted into Y Combinator while still at $0 MRR
Browse the most vetted database of SaaS coaches Browse Coaches
Our blog 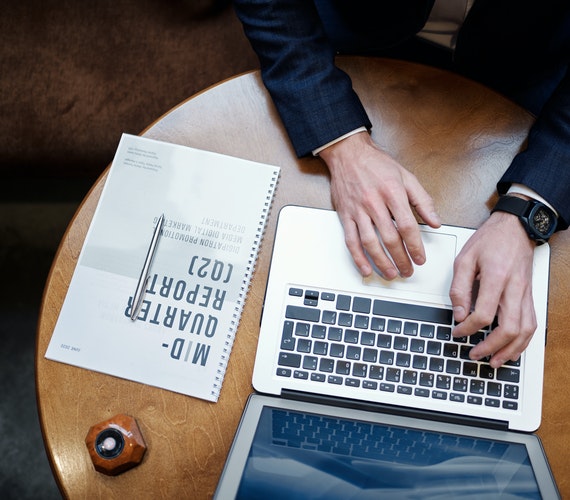 Starting a SaaS company comes with ups and downs. Learn on this post the experiences that I had during the first 6 months of launching Feedier.com 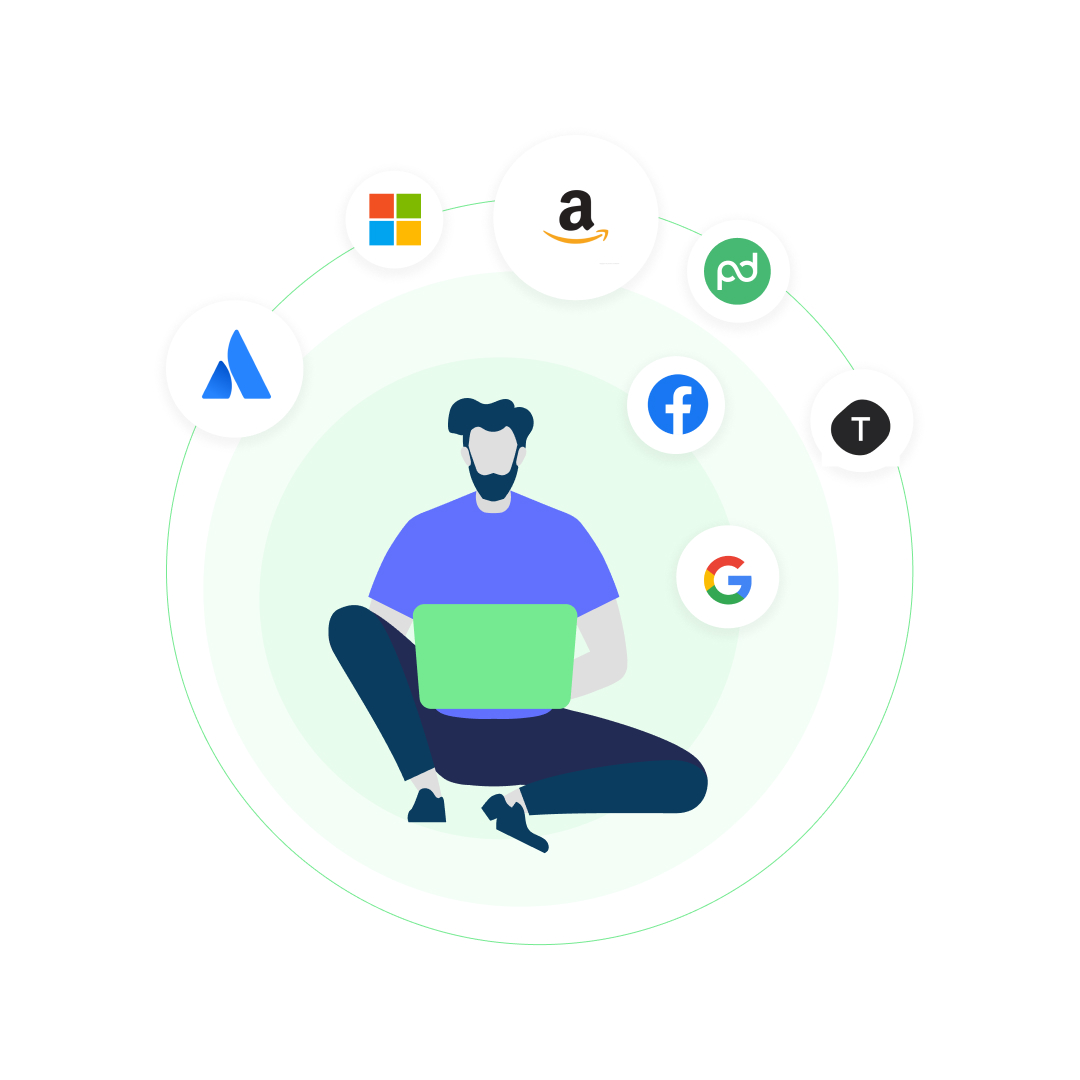 Dealing with SaaS tool overload? Yea, me too. Maybe it's time you take a digital detox?

Yes, SaaS tools can be cool, but they can be a major time-drain which can hurt your productivity. In this post, I share my thoughts on how to deal with SaaS tools sprawl and implement some digital detox into your life. 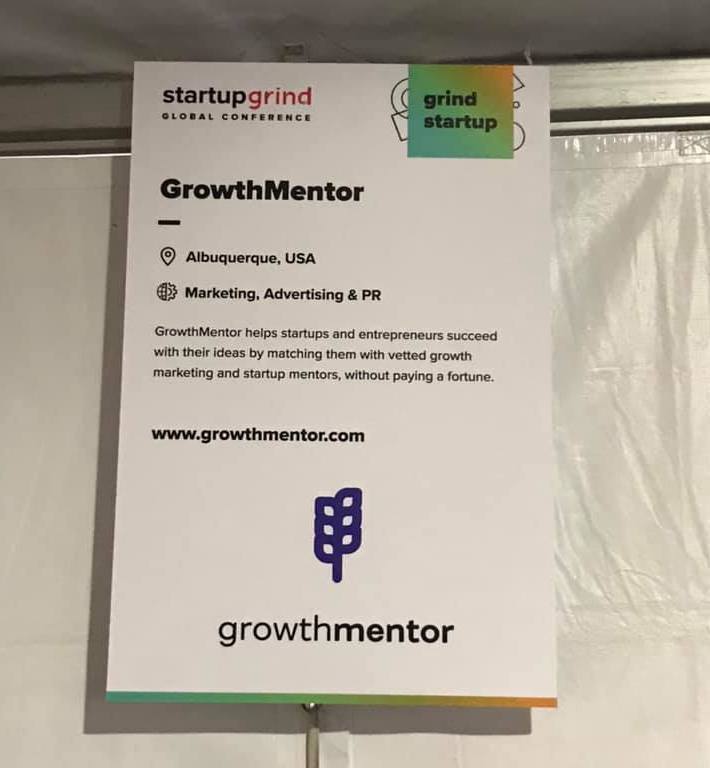 The low-down on the Startup Grind Global Conference

The annual Startup Grind Global conference takes over Redwood City, California once a year. The streets are closed off and the local pubs are fully stocked. By the end of the day, the local Starbucks’ shelves look like a grocery store hours before a hurricane is about to make landfall.