Growth Teams are connecting marketers and founders from around the world and bringing them together to chat about what they are working on, their struggles and their goals.

I love writing these Feature and Product Update posts because honestly I could write them in my sleep.

HOURS (probably even full DAYS) of discussions take place before something is finalized, developed and launched. Therefore it’s all so ingrained in my mind, that it is a piece of cake to jot down in written form.

That being said, this particular idea popped up pretty quickly.

But the name Growth Teams haunts me in my sleep as I’ve heard 2 million suggestions of what it ‘could be’.

The need to connect

Seeing everyone setting up Zoom calls for TGIF drinks and general social ‘catch-ups’ appeared pretty quickly in the startup world as soon as quarantine days started.  (I hope to soon come back to this and edit it to reference a past time in history that we were in lock-down and that quarantine days are not the new norm- I’ve read too many dystopian novels).

For GrowthMentor this has been the norm since day 1.  Connecting online with someone else to problem solve and go over strategy using Zoom, Skype, Hangouts, whatevs!

We could see that people wanted something a bit more casual than a 1:1 call where a problem is identified and it’s formally scheduled between the two parties (which is what happens on the GrowthMentor platform in case you are new here).

People wanted to shoot the breeze as they may do at happy hour on Friday evenings, but still have the conversation center around what they are working on.

The two main aspects of GrowthMentor

As I write this, 3339 one on one calls have been booked on GM.  I’ll grossly simplify and say that 3,339 times someone had an issue or a question and wanted to run it by someone else.

Members select their mentor by sorting through the big ‘ol Browse All list using our nifty filters of they post a Help Request and let the mentors apply to them.

This works great and both sides give rave reviews about the calls.

BUT what if you don’t necessarily have a pressing issue that warrants booking a mentor for 30 minutes?

We’ve always encouraged our members to use our Slack group for things like that- just a quick question or looking for some feedback.  Makes sense right?

Reflecting back to when GrowthMentor was in ideation and Foti and I were rambling on and on about the different paths we could take and the endless possibilities that lay ahead of us, I don’t think we ever thought about how much of a role community would play in everything.

We couldn’t be more happy with the way things have turned out!  PEOPLE RULE!

BUT what if you want more than random Slack chats?

You guessed it- we direct people who want more to book 1:1 with mentors.

We thought we had an answer for everything.

Let’s merge the two aspects mentioned above and give people a chance to socialize with totally random people from around the globe and chat about startups and growth in a casual setting.

Foti loves analogies, so let’s see if he likes this one…

I have been teaching 1:1 English online for 10 years and there is nothing worse than someone asking if their colleague can join the call.

The awkward interruptions and ‘should I speak now’ moments, just make me cringe.

We need these calls to have some structure and not just be flippy floppy willy nilly.

So we’ll have a moderator to keep shit in order ✔

Let’s throw in the accountability angle since every single human being I have ever spoken to wants to have better organization and prioritization skills in their lives and that can all be helped by being held accountable by someone else.

We’ll have the same questions each meeting that put members on the spot to set goals (hopefully not Big Hairy ones) and answer for them in the next meeting.

Full disclosure- these questions are based on the ones we used in YC’s Startup School group calls.  However, those calls were with different people each week, so there was zero accountability.

Puzzle time is my fav!  How the hell will we group people from all over the world together?  Not to mention that our community is divided into two main personas of ‘founder’ and ‘marketer’ with the majority identifying as BOTH.

Organize groups based on their preferred meeting time, role and desired frequencies of meetings ✔

I did my best to group together the 40 responses and pop everyone into teams.

The first call took place 5 days after we sent out the Typeform and it was a hit! 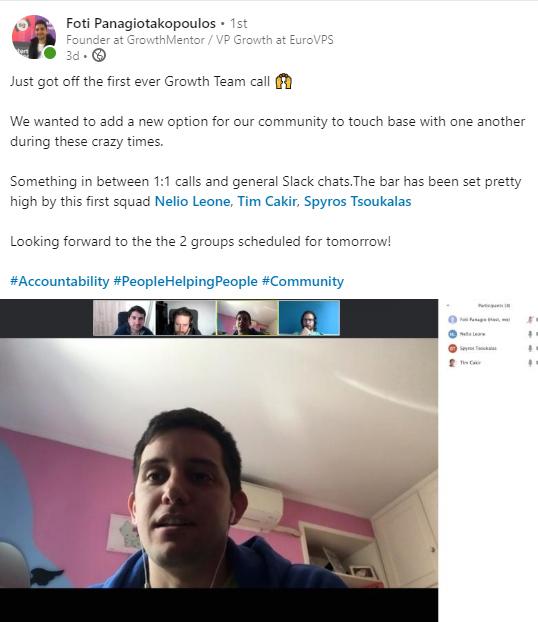 I gave each group a color name (hence the feature image) and set up the calls with Zoom links and calendar invites.

As we’ve learned by now, things like this need to be given room to breathe and flourish on their own.

We’ve got our moderators and set questions, but each group will have a personality of their own and make adjustments where needed.

Members will get busy and opt-out and new members will join with enthusiasm- it’s the circle of life y’all! 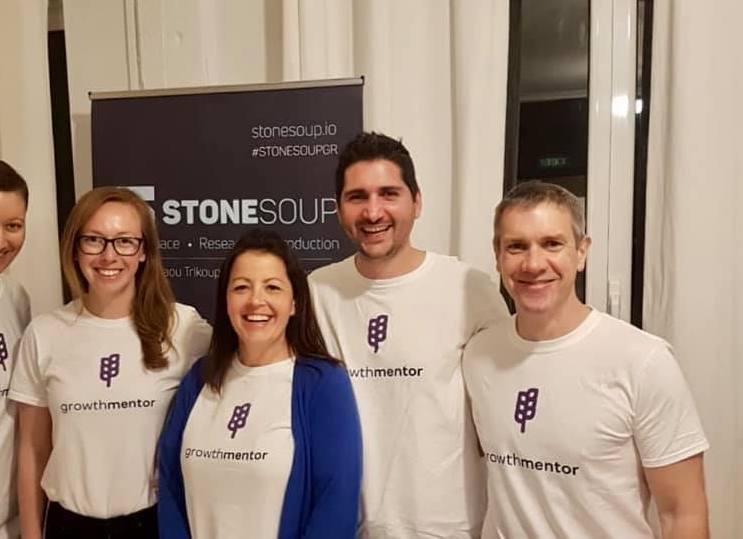 Building a Platform to Scratch My Own Itch

They say the best products and services are those that are created out of a desire to scratch your own itch. Probably, someone else is itchy too! Well that’s exactly how GrowthMentor was founded. Read the full story here. 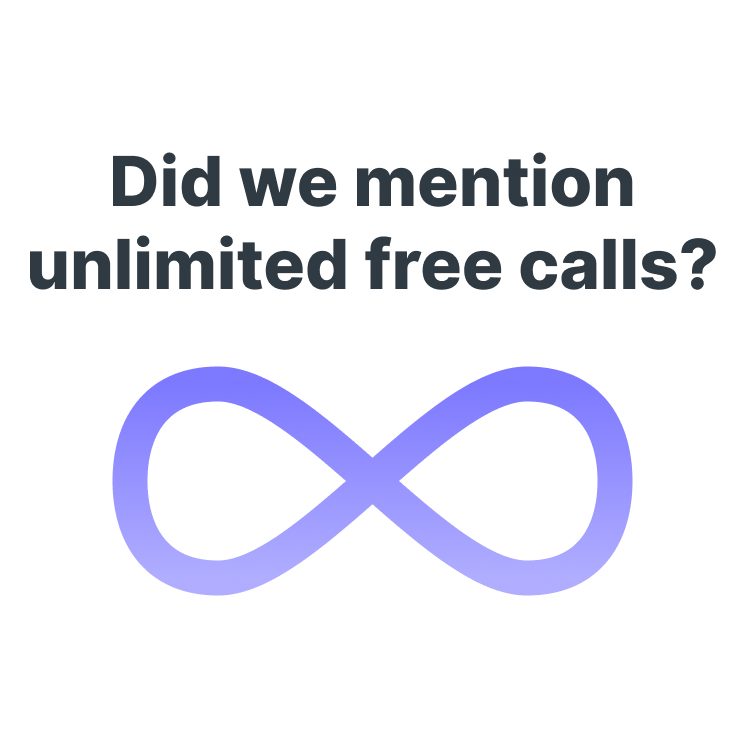 GrowthMentor members are now able to schedule unlimited calls with mentors marked as free thanks to this new update. 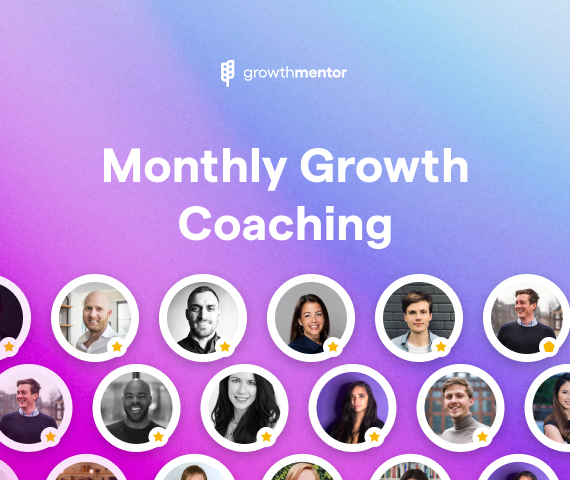 You can now have your favorite growth mentor on a monthly retainer. Ask questions in real time and get results fast.